The Secretary of State for Health’s explanation of what an A&E Local at Telford’s Princess Royal Hospital will look like - open only during “core hours” – has been branded a smokescreen to cover its full 24/7 A&E facilities’ downgrade. 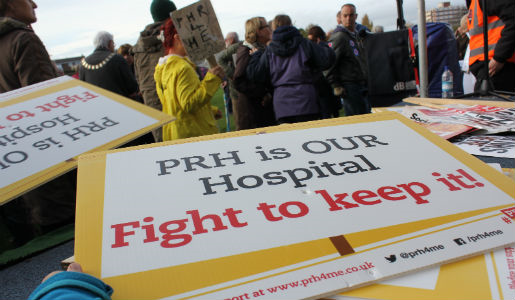 A letter sent to council leader Shaun Davies today shows that an A&E Local would:

• be available only during the Trust’s “core hours” - although there’s no indication of what these are. Outside of this the PRH will have an urgent care centre to treat less serious conditions.

To ensure patient safety, the NHS says comprehensive pathways and protocols will be needed with the ambulance services to transfer patients to other hospitals and an A&E Local must be able to stabilise seriously ill patients so they can be transferred to another hospital.

Council leader Shaun Davies said these details confirmed that an A&E Local would downgrade the service the PRH currently has.

“To pretend that A&E will continue at the PRH as the Secretary of State claims is taking everyone here for fools. Look at the evidence.

“The NHS says that signage to the PRH will have to be changed and a major local communication campaign undertaken to explain to people when PRH has an A&E service.

““I am sure people will draw their own conclusions.

“A&E Local is just a smokescreen to hide that PRH’s full 24/7 A&E service will become a part time service, with fewer clinicians and with capacity to treat a much smaller number of health conditions. Today’s information just confirms our worst fears.”

His decision followed the Council referring the Future Fit hospital reconfiguration programme to him. It will mean that Telford will be the largest town in the country without a 24 hour Full A&E.

Separately Cllr Davies has requested Prime Minister Boris Johnson intervene and overturn Mr Hancock’s recommendation that will see the downgrading of A&E services at the PRH and the consultant-led Women & Children’s Centre, opened five years ago in Telford at a cost £28 million and because of clinical need, also moving to RSH.